Chronic malnutrition afflicts nearly 165 million children under the age of five worldwide. It has a crippling effect on the economies of the countries where it’s most prevalent. Even the United States is not immune from this debilitating condition.

This chronic health condition is caused by poor nutrition in mothers both before and during pregnancy and lactation, and in children during the first 24 months of life. Left untreated, it causes irreversible damage, resulting in stunted physical growth, decreased cognitive ability, and increased risk of chronic diseases in adulthood.

In addition to the human cost, the health problems associated with chronic malnutrition have been estimated to account for productivity losses that add up to 5% of the GDP—equivalent to $3.5 trillion worldwide. In countries where chronic malnutrition is most pervasive, it has a crippling effect on economic growth and development.

The future prosperity of the world is closely connected to how we tackle the problem of chronic malnutrition. Sustainable Nutrition International offers a new, sustainable solution to the problem—one that doesn’t just save lives, but that also positions children, who were previously at risk of physical and mental retardation, for a lifetime of opportunity to achieve socioeconomic success…an opportunity we often take for granted.

The Cycle of Malnutrition

Public and private sector institutions spend billions of dollars annually in efforts to meet the daily nutritional needs of malnourished populations worldwide. Many of these programs do make a difference on a temporary basis by providing nutrition to at-risk populations and emergency relief to save individuals from starvation. But they’re short-term answers. Few programs provide sustainable long-term solutions to the problem of feeding malnourished individuals when they need it most to prevent a lifetime of underachievement and poverty.

Sustainable Nutrition International has had proven success in breaking this cycle. And now, seeks to expand the breadth and depth of our programs through a shared-value initiative with our stakeholders.

Changing the life of a child not just for a day, but for a lifetime. 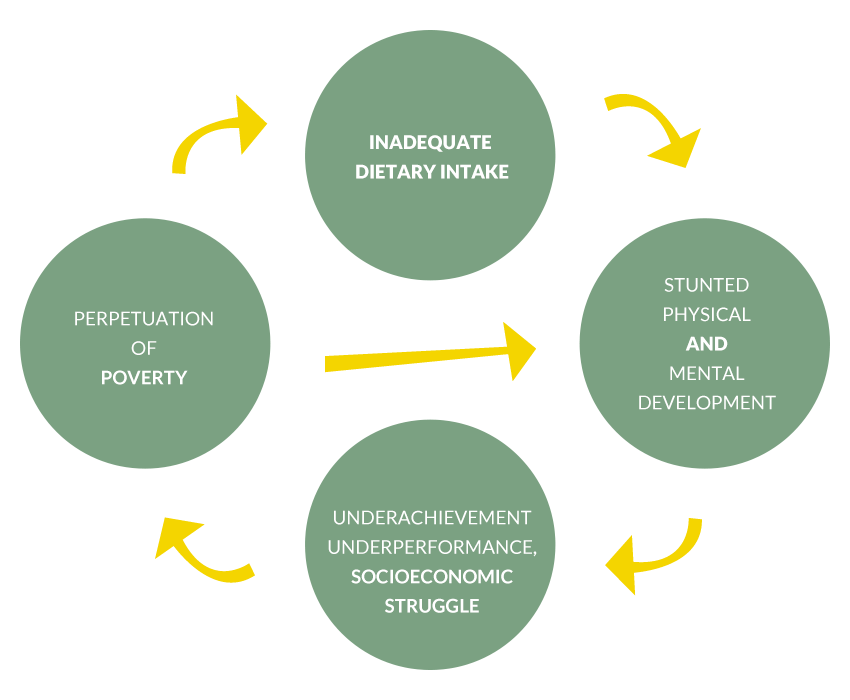 Chronic malnutrition is a devastating global problem. Here’s why:

Nearly 165 million children under the age of five suffer from chronic malnutrition worldwide.

Children who suffer from chronic malnutrition perform poorly academically, suffer from low productive capacity, and are at a higher risk of becoming wards of the food welfare system.

The health problems caused by chronic malnutrition have been estimated to account for productivity losses that add up to $3.5 trillion.