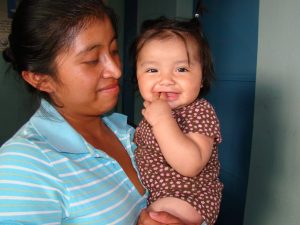 In collaboration with the USDA Foreign and Agricultural Service and the Governments of Guatemala, Honduras, and El Salvador, the current principals of Sustainable Nutrition International and Intermark Partners Strategic Management (IPSM) led a pilot test to establish baseline documentation for the nutritional potency of rice bran derivatives.

These preliminary pilot studies were implemented from 2000 – 2001 among 67,000 school-age (ages 6-10) children across 76 school districts in Guatemala, 35,000 school-age children in 174 primary schools in El Salvador, and among 1500 lactating mothers across the region.

The only change in the test population’s diet was 30 grams of single-phase stabilized rice bran (SRB) extract in their daily breakfast milk drink. All children in the program were tested prior to program commencement.

At the end of one full school year (10 months) the program results in Guatemala showed that the number of children diagnosed as malnourished had declined from 37% to 5%, while those who were at risk of becoming malnourished dropped only slightly from 46% to 44 %. Meanwhile, the number of children diagnosed as normal increased dramatically, from 17% to 51%.

In El Salvador, malnutrition was reduced by 15% in a 6-month period, compared to 1% in the control group that did not receive the single-phase stabilized rice bran (SRB) extract. The lactating mothers´ component of the program was conducted over a 2 month period, producing equally positive results. It was found that: (1) the overall health of the program participants increased dramatically, (2) the pregnant mothers delivered healthier babies with increased live birth weights and fewer stillbirths, and (3) the newborn infants achieved significantly greater developmental capacity during the first six months when compared to the control group.

These results confirmed the potential benefits of nutraceutical rice bran derivatives in addressing chronic malnutrition in nutrient-deficit regions worldwide but required further development to extract the highest possible nutraceutical nutrition from the rice bran under FDA-DSHEA Guidelines. The patented extraction technology underlying NutraLac® was developed with this goal in mind. The proprietary, nutrient-dense NutraLac® formulation is being delivered to several nutrient-deficient populations in North, Central and South America. We are currently seeking partnerships and funding to help us expand to other locations as well, including nutrient deficit infants in the United States.